Yesterday, on 24 March 2020, the images of Vietnamese bread (Banh Mi) have appeared on the Google homepage in 12 countries including the US, Canada, Singapore, France, Australia, Switzerland. This is not only to honour the typical famous Vietnamese cuisine but also to celebrate the 9th anniversary of the word “bread” recorded by the Oxford dictionary. 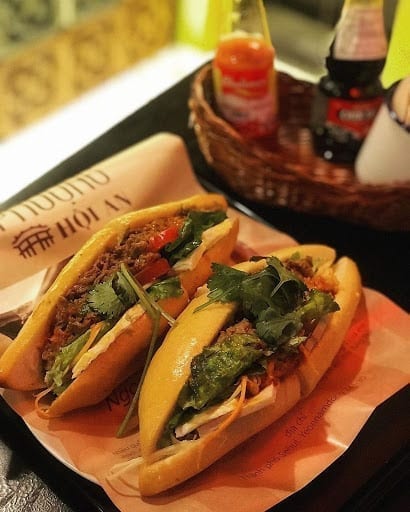 Vietnamese bread is a fresh mix of meats and vegetables

The illustration of the ancient town Hoi An, Ca Tru death anniversary or special holidays such as Vietnam Teachers, Mid-Autumn Festival, Chinese New Year, National Day used to be honoured on the Google Vietnam homepage. However, this is the first time a Vietnamese dish has been honoured and even appears on the Google homepage of different countries.
According to the explanation of the “Google doodles” on 24 March, Vietnamese bread may have appeared since the 1950s in some bustling alleys in Saigon. However, people believe that the bread comes from the crossroads of French – Vietnamese culture. The long loaves of baguette bread with cold meat and butter or cheese from the beginning have been modified with additional fillings such as pork, lean pork pie, pate or meatballs, fried eggs, vegetable pickles, herbs, onion, cilantro, soy sauce, chilli sauce or fresh chilli, etc. The diversified flavours and the taste full of sour, spicy, salty and sweet of Vietnamese bread bring about an amazing experience for every diner from the first bite.
During a visit to Hoi An (Quang Nam), chef Anthony Bourdain had a chance to try Phuong bread and at once declared it to be “the best bread in the world”. Later, the fascinating Vietnamese bread cuisine was appeared on his No Reservations channel and became more and more popular around the world since then.

Earlier, The Guardian ranked Vietnamese bread in second place in their list of the best street food in the world. David Farley, a culinary journalist of BBC travel also praised Vietnamese “banh mi” as “the best sandwich in the world”.
Almost all tourists visiting Vietnam are in love with this inexpensive street food as “banh mi” is always among their top must-have dishes when wandering here.
To make a Vietnamese bread, the wheat dough is baked in the oven at 2000 Celcius degrees within about 20 minutes for a crispy outside but moist inside texture. The sauce and some fillings may be prepared in advance to add in only when there is an order. In Vietnam, bread is a favourite dish for breakfast due to its freshness and convenience.
The most popular flavour of the bread is the fusion of butter, pork sausage or pork pie, eggs, coriander leaf, cucumber & carrot pickles, the paté originated from French, special sauces like homemade chilli sauce, mayonnaise, etc., creating a truly amazing harmony of meats and vegetables of the great combination of Vietnamese and French cuisine.
Note down Vietnam in your must-have travel list to enjoy the best trip of your life!