Travellers must know these onsen rules before travelling to Japan

It can be said that the love of purity and appreciation of beauty has become an obsession for the people of the Land of the Rising Sun. Onsen bath is the way the Japanese keep their bodies and souls clean and pure.

Take time to learn about Onsen culture before travelling to Japan

It is not an exaggeration to say that Japan is the destination of the best hot spring bath culture in the world. Among 2,983 hot spring towns and 27,297 hot spring locations throughout Japan, Onsen baths are mostly located in the countryside.
Nowadays, in order to attract tourists, more and more onsen bath service has been expanded in urban cities as well. However, these places are actually called Sento (a type of soaking in hot tubs), or public onsen baths (お ん せ ん). Onsen is written in a kanji Japanese style as “温泉”, which is pronounced in Chinese the same as “temperate”. Therefore, the Japanese only use the word onsen for the original natural hot springs. 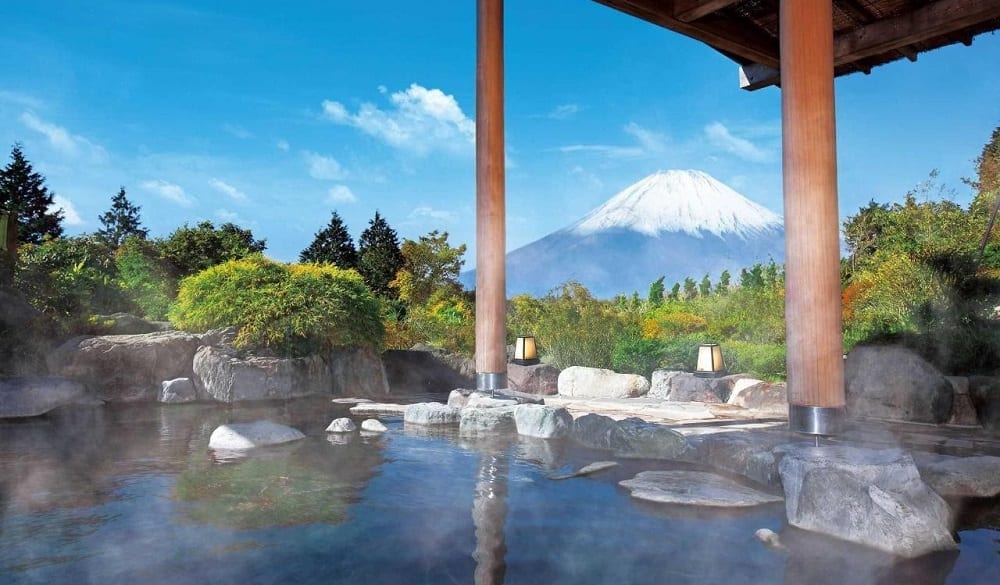 An amazing onsen view to the mount Fuji in Japan

Onsen is actually the best way to enjoy the beauty of countrysides in Japan. Many of the hot springs are located next to the rivers with mountain views and even inside an extremely beautiful garden. Therefore, onsen bath is an experience visitors do not want to miss when travelling to Japan – the land of the rising sun.
Taking an onsen means bathing with a lot of others as in Japanese cultural history, bathing together is a long-time tradition. Bathing together happened to be a necessary part of the old days in Japanese history when very few families were able to build a private bathroom. To be honest, as most of us are used to taking a shower individually, this is totally a thrilling and exciting memory for you on a trip to Japan.
Before planning a visit to Japan, take a look at the “principles of taking onsen bath” to avoid unwanted confusion.

THE PRINCIPLE OF TAKING A ONSEN BATH

1. Showering thoroughly before the onsen

The reason for showering thoroughly before taking an onsen bath is that the Japanese enjoy the onsen as a relaxing therapy. On top of that, the onsen is an area where people take a bath together so everyone’s bodies must be washed and bathed before being soaked there.

2. Do not wear a bathing suit to the onsen

To make sure no one feels uncomfortable, most onsens are separated into independent areas for male and female. Therefore, don’t be stressful when not wearing clothes at an onsen bath on a trip to Japan, even if it’s just a simple swimsuit. It is such an opportunity to come natural and honestly, it is a norm not to wear anything at onsen places.

Otherwise, you can choose to take an onsen bath privately. As many foreigners feel awkward with the culture of naked bathing, the completely private onsens were introduced, which is a great solution for everyone. However, of course, the cost for private onsen is much higher than the common ones.

3. How to use towels during the onsen bath?

How to use towels when taking an Onsen bath

When taking an onsen bath on a trip to Japan, you will usually be given two towels: one big and one small. The larger one is used for complete drying after a relaxing soaking and the smaller one is often used to cover the sensitive part discreetly while walking between the showering area and the onsen. After immersing your body in the onsen, that towel should be tied around your forehead to cover your head or placed somewhere near the edge of the tub. Just make sure that it is dry so you can use it again when walking out of the onsen area.

Onsen bath is a kind of therapy that not only helps your body relax after stressful hours but also helps to eliminate toxins from your body through hydrostatic pressure on it, thereby, increasing blood circulation. In addition, small amounts of minerals like carbon dioxide, sulphur, calcium, magnesium, and lithium will be absorbed to your body after the onsen, which helps to stimulate your immune system, enhance your immunity, produce endorphins for the whole body relaxation physically and mentally.

WHERE TO TAKE ONSEN BATH IN JAPAN

Travelling to Japan, you can find different hot springs in almost all cities throughout the country. It is noted that the centre of Hokkaido, the west and north of Tokyo are the destinations with the largest number of Onsen services. However, the most famous Japanese onsen is located in the town of Kinosaki which maintains seven forms of traditional onsen.

How peaceful the street in Kinosaki town is?

Having existed for more than 1,300 years, Kinosaki town owns a great diversity of hot springs. The most famous ones are Satono-yu, Ichino-yu, Goshono-yu, Mandara-yu, Jizo-yu, Otori no yu and Yanagi-yu. Only coming to Japan can you enjoy and see the different levels of relaxation at various onsens. Wearing a yukata (a traditional Japanese costume) strolling through endlessly beautiful streets, admiring the quaint scenery of the ancient town and experiencing the seven famous hot springs are some other favourite activities visitors like the most in Kinosaki.