Heart Reef: the iconic spot in Great Barrier Reef is now open after 45 years off limits

Alone, but not unloved, tiny Heart Reef is the pin-up star of everything that’s beautiful on the Great Barrier Reef – its perfect heart shape, its glittering lagoon, its intricate corals and its romantically remote location. 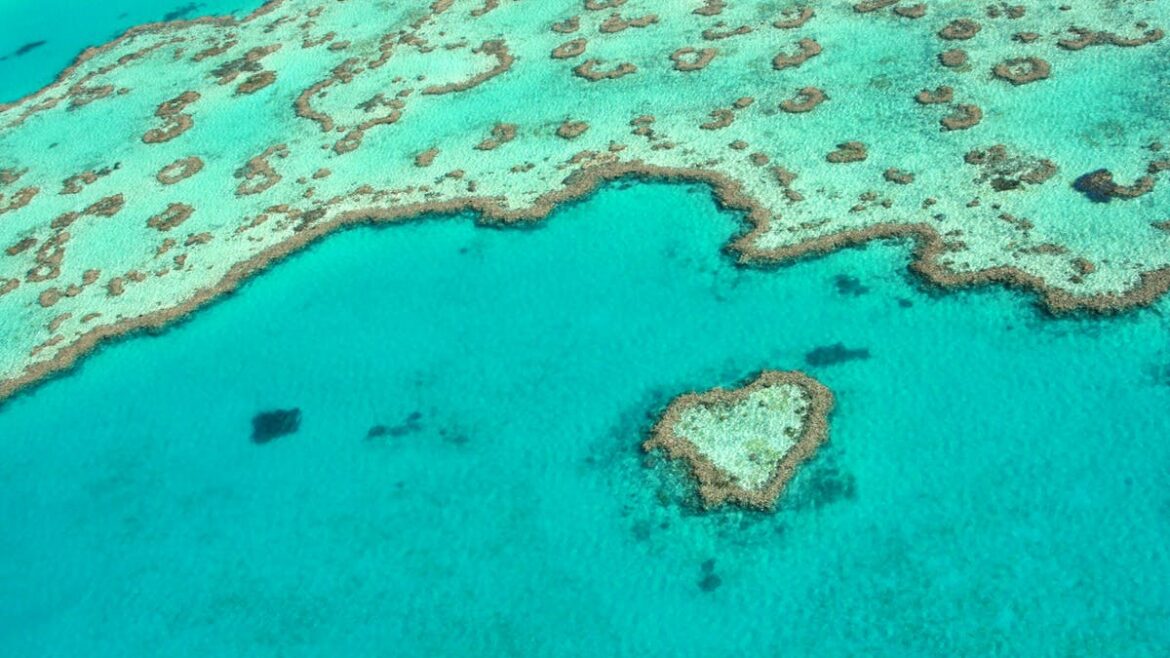 How remote? Hidden within the Hardy Reef lagoon, Heart Reef is about 90km from Hamilton Island in the Whitsunday Islands, off the coast of Airlie Beach. Hovering above it in our shining red Airbus 130T2 helicopter, we see nothing but blue sky and bluer sea patterned with curiously named, curiously shaped reefs.

Despite its slender size – it’s only about 25 metres wide – the sweet little heart-shaped bommie is probably the best-known formation in the 3000 coral reefs that make up the 2300km Great Barrier Reef, and is the poster child for conservation and North Queensland tourism operators. 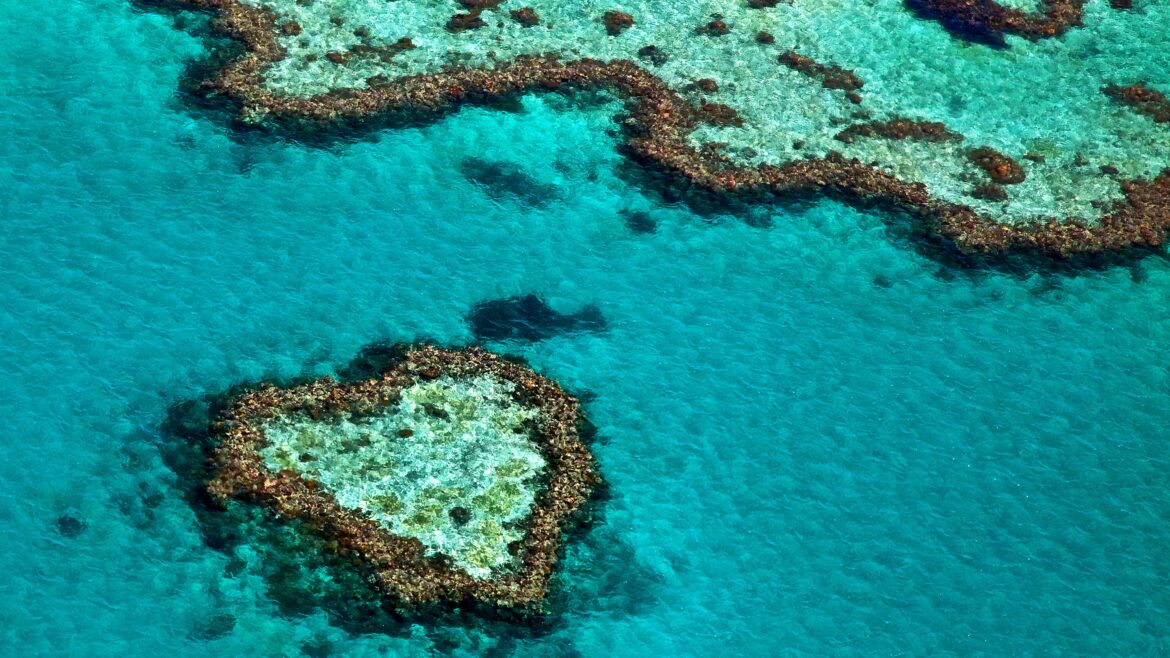 Its fame is relatively newfound: spotted by a (possibly lovesick) local pilot in 1975 – the same year the Great Barrier Reef Marine Park was created – Heart Reef has been off limits, protected partly by its conservation status, partly by its beauty.

“But this area has remained pristine mainly because it’s just too hard to get to,” says Brad Graves, pilot and chief executive of Hamilton Island Air, which runs helicopter, seaplane and airplane tours around Heart Reef. “The only way you’d see it from the sea is to go into the Hardy Reef lagoon at high tide in a little boat, and wait for the tide to go down.” 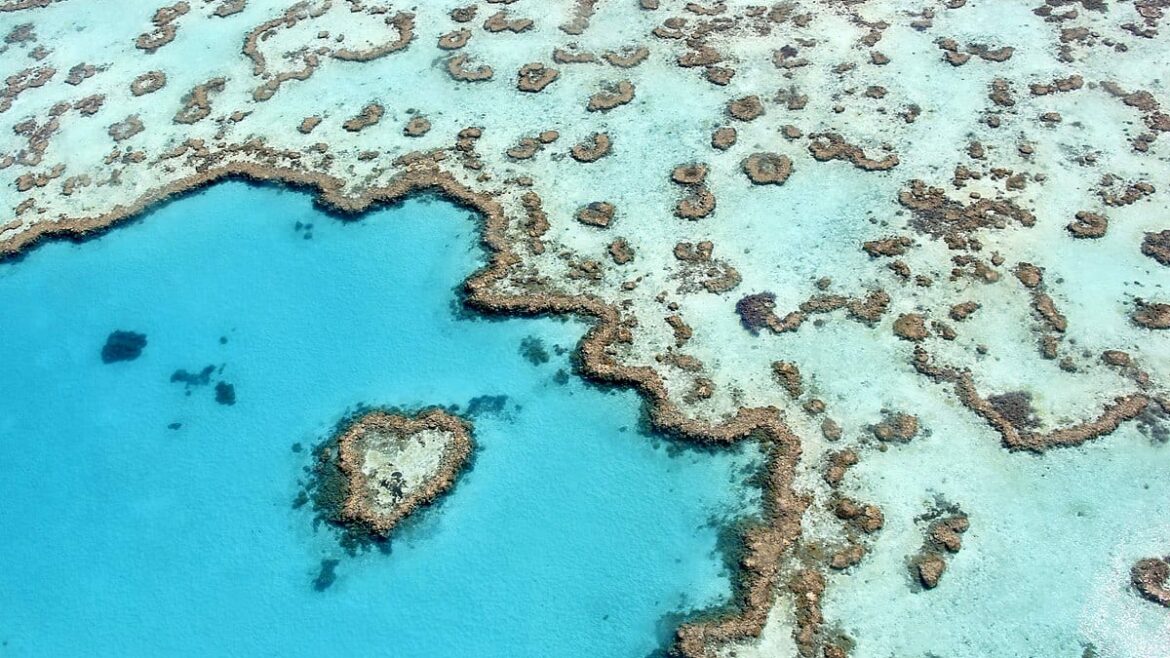 “At high tide, the reef becomes open ocean, affected by the wind and waves. You could fly past and miss it,” says Graves.

“But then the tide goes down and the reef comes up, and it’s a sheltered swimming pool.” 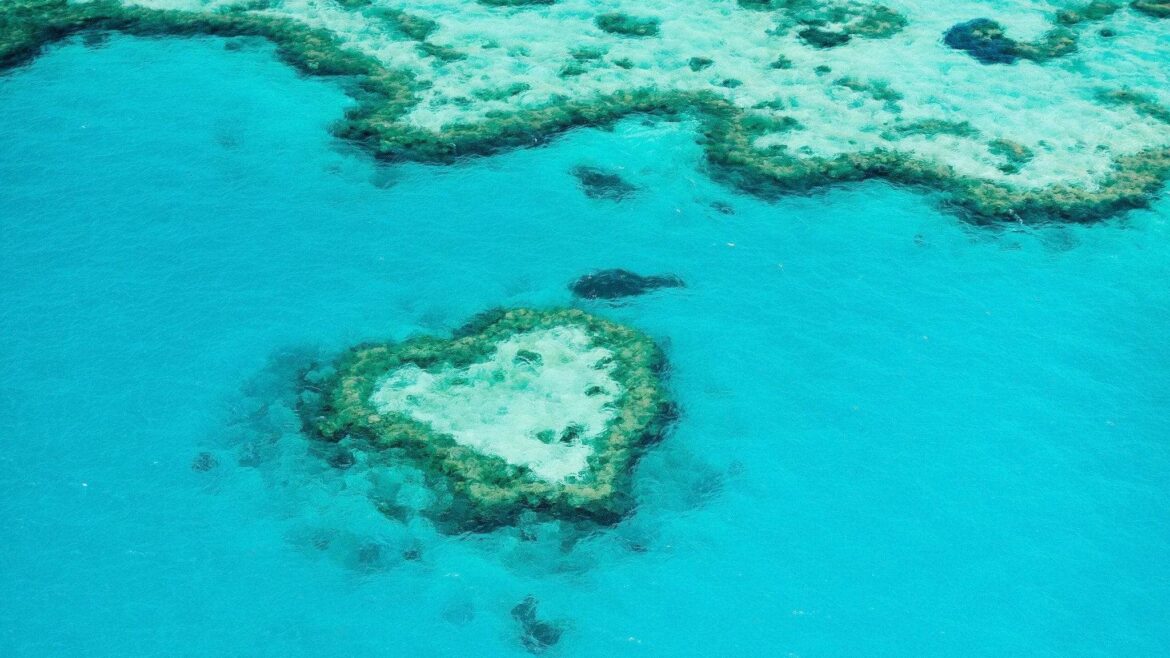 Reefworld has operated two pontoons on Hardy Reef for over a decade, catering to cruise ships, daytrippers and sleepovers in swags, and offers scenic flights over Heart Reef. However, its new configuration houses two underwater suites and 12 queen-sized beds up on deck for total immersion in the ecosystem.

Meanwhile, it’s taken 10 years of paperwork to allow Hamilton Island Air to moor its wind- and solar-powered Heart Island pontoon 300 metres from Heart Reef. Available exclusively to Hamilton Island guests, it’s a 30-minute chopper ride for up to six people to the bommie at low tide via the world’s most beautiful strip of sand, Whitehaven Beach. The snorkelling and sparkling wine quaffing occurs on a private pontoon wouldn’t look out of place in a supervillian’s real estate portfolio.

One of the conditions of operation is there is no swimming onto Heart Reef itself, to keep it pristine for all, which includes not getting in others’ photos. And this is why it will remain free of influencers flaunting bikini-clad bods or moguls mugging it up for the camera.

A few celebs have dipped a toe in the limpid waters surrounding Heart Island, among them British songstress Dua Lupa, who popped in after her appearance at the 2019 ARIAs, and swimming legend Ian Thorpe.

And the only intruders in photos of the bommie are a carefully placed seaplane or a perhaps a boat: that’s most likely to be Heart Island’s million-dollar glass-bottomed eco-boat, weaving carefully between coral forests.

Far more interesting than humans are the schools of glittering fish in citrus yellow, flashy red and deep purple. As the reef walls drop away, the deeper waters host giant gropers, turtles, dolphins and rays which we spy from the helicopter, and the route also becomes a humpback whale highway between July and September.