Lying in a beautiful valley on the bank of the Ping River, Chiang Mai is the largest city in Northern region of Thailand. Blessed by nature, it is surrounded by greenery mountains, rivers, waterfalls, jungles, and other wonders.

The name Chiang Mai means “new city” in Thai. It was founded in 1296 as the capital of the ancient Lanna Kingdom. In this city, the borders of past and present seamlessly blur. Modern architectures stand side by side with hundreds of ancient temples.  Home to over 300 temples, the city is also considered a cultural hub of Thailand. Wanna put your slow travel ambitions into action? Then this relaxed, tranquil city is deserved to be on your bucket list soon. 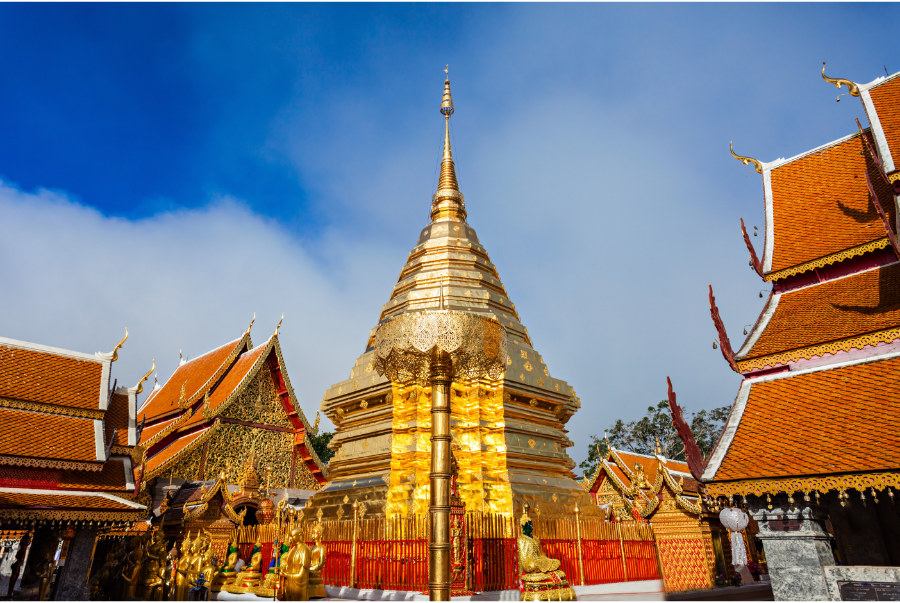 The ideal time to visit Chiang Mai is the dry season lasting from October to April before the extreme temperature of tropical summer hits the city.

Where to go in Chiang Mai?

The Doi Suthep-Pui National Park is a 262 square km protected area that hosts Chiang Mai’s most sacred hilltop temple, Wat Phra That Doi Suthep. Beside this renowned temple, nature lovers can find many miles of beautiful cycling and hiking trails, mesmerizing waterfalls, campsites, and bungalows in the park. 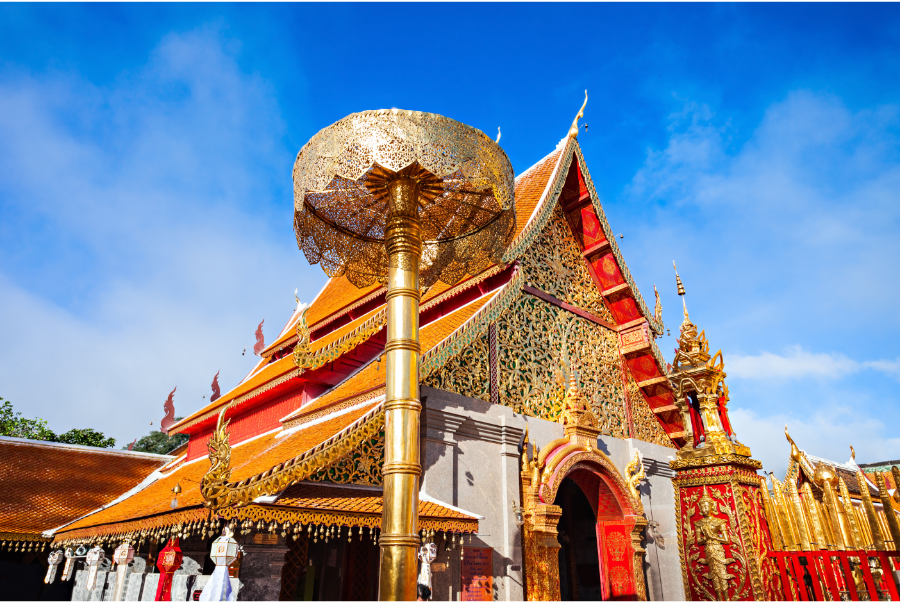 The Doi Suthep-Pui National Park is one of the most accessible natural sights in Chiang Mai. It only takes a 35-minute drive from the city centre. Visitors can explore most of the park on their own, but a guided trip to help navigate the long trail to the top of the mountain would be the best option. 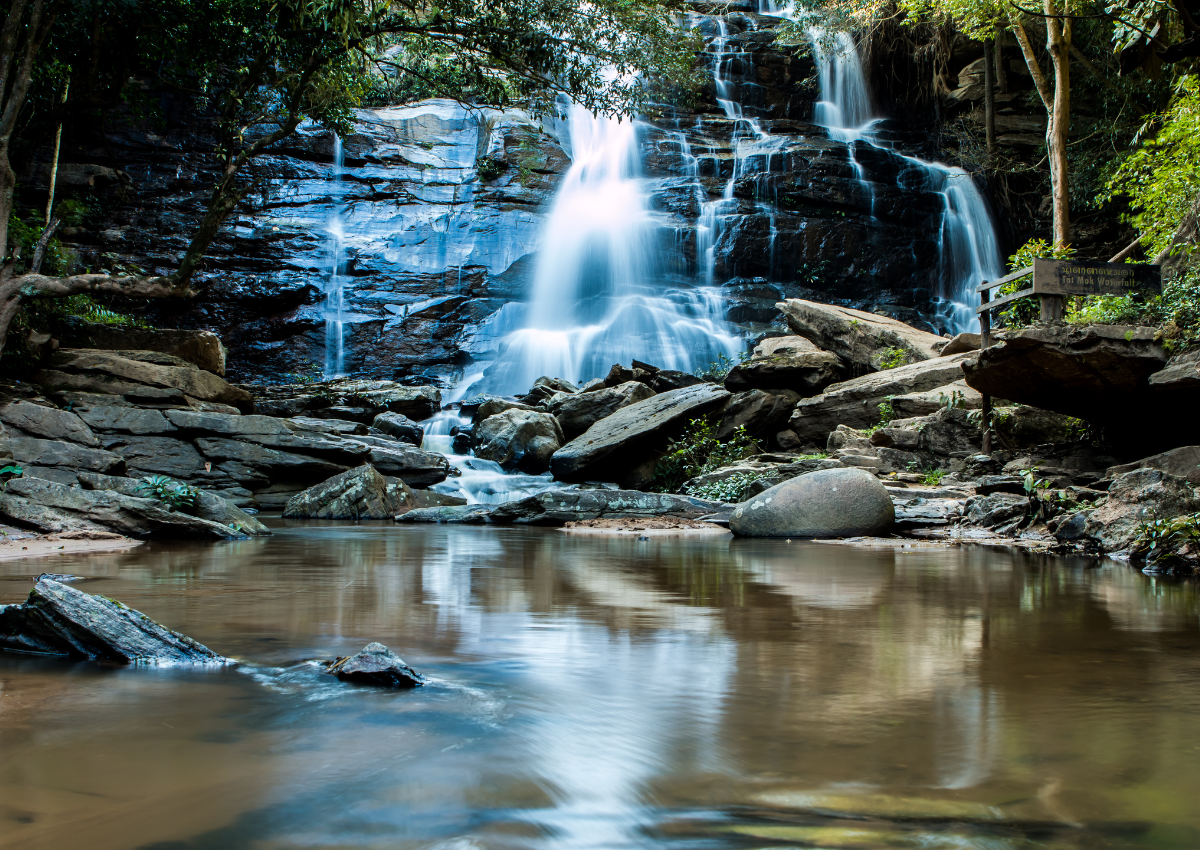 Known as the “Handicrafts Highway”, San Kamphaeng is an 18-kilometre stretch of highway just outside Chiang Mai that builds its solid reputation for its arts and crafts. Date back to 1902 and increasingly become popular today, this area includes villages and factories which produce a variety of handicraft items such as local silk, pottery, lacquer ware, jewelry, and honey. The road is filled with countless local shops on its both sides, allowing a glimpse into Chiang Mai’s centuries-old traditions. For anyone keen to collect cultural products or simply wanna see craftsmen at work, San Kamphaeng is the ideal attraction to stop by.

This fascinating museum presents the life of the Lena people, natives of Northern Thailand. A visit to this local museum offers a great chance to learn about their customs, culture and long-standing heritage. The museum, also known as the “Lanna Heritage Center” is located in the center of the Old City and set inside the old Chiang Mai Municipal Court. It is open to visitors from Tuesday to Sunday, from 08:30 to 17:00. 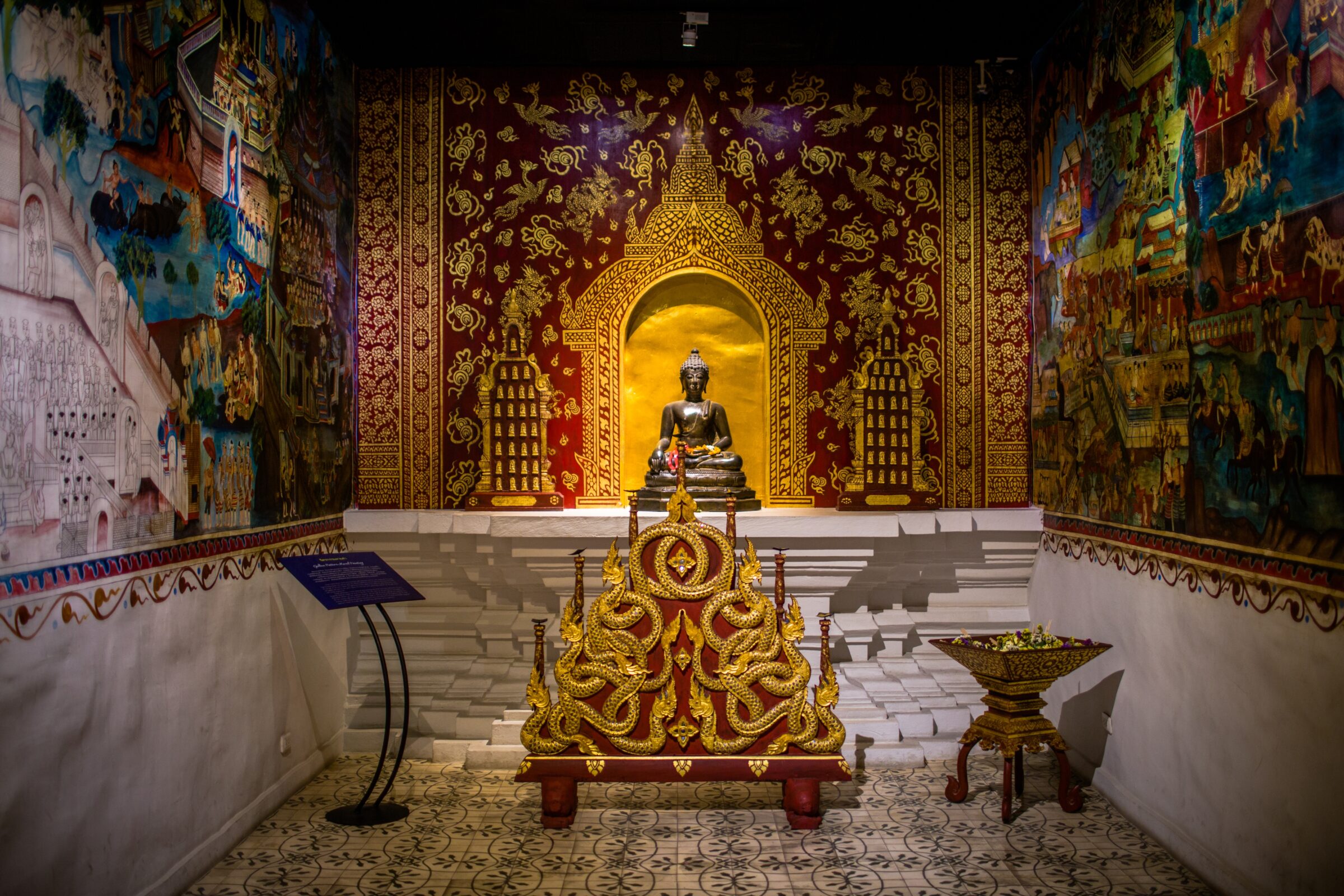 Elephant Nature Park was one of the first parks in Thailand ever created to protect elephants. It’s a true sanctuary for rescued elephants, including those that are disabled, blind, orphaned or victims of abuse. The elephants roam freely in a peaceful natural environment in a valley surrounded by lush mountains and jungle. Elephant Nature Park is also the only sanctuary in Thailand to be supported by the Save Elephant Foundation. 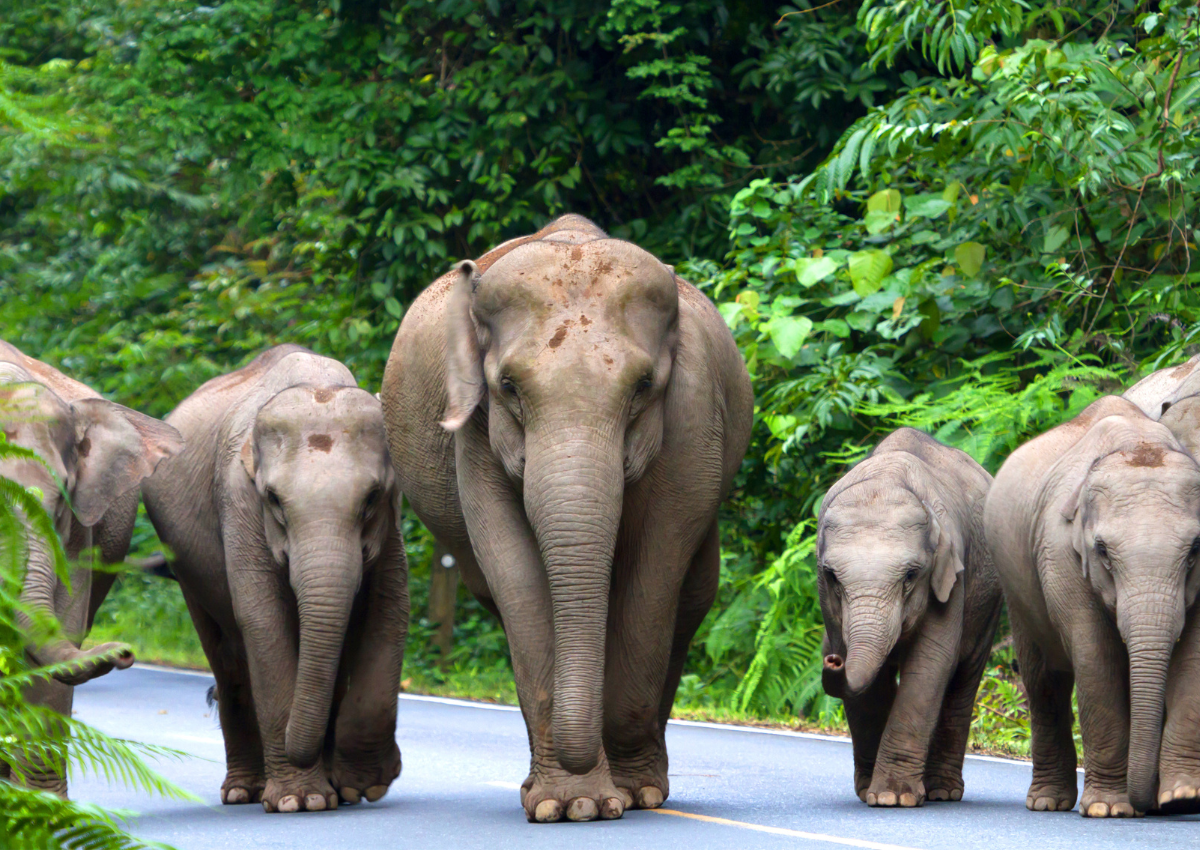 Visiting this park is a rewarding ethical experience in Chiang Mai. Visitors can enjoy close encounters with these lovely, giant creatures by feeding and bathing them in the river. From city center, Tuk tuk is considered a fun and convenient traditional transport to get to the park. Of course, riding the elephants is banned here.

What to do in Chiang Mai

With over 300 temples scattered in different areas: throughout the city itself and in its rural surroundings, Chiang Mai is truly “the temple capital” of Thailand. Most of these temples date from the 13th to the 18th centuries and are in the “Lanna” style, native style of architecture. This style is characterized by curved wooden roofs and other spectacular elements. Here are a number of temples that must be visited in Chiang though it can be crowded in peak season. 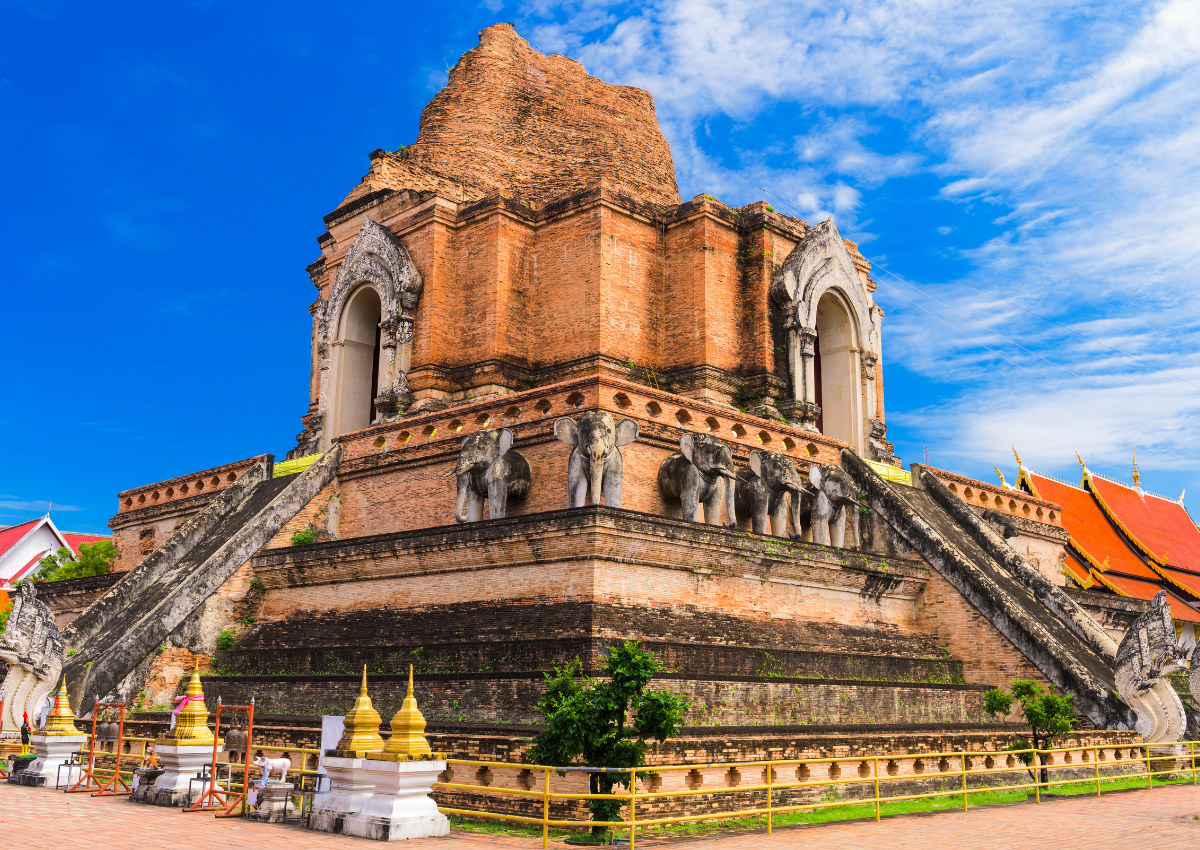 Wat Phra Singh: The most celebrated wat after Doi Suthep. Lai Kam assembly hall and its restored murals depict the lives of locals hundreds of years ago.

Wat Umong: This 700 years old Buddhist temple is the only forest temple in Chiang Mai with strikingly impressive architecture.

After a long day spent discovering Chiang Mai on foot, nothing’s better than self-indudge with a traditional Thai massage to relax and rejuvile! Massage parlors are easy to be found all over the city, around temples and in the streets of the old town. Most hotels also offer massage services with really nice spas.

A journey to Chiang Mai would be much more appealing if you are lucky enough to be here during one of the city traditional festivals. There are 3 main ones which attract thousands of Thai people and travellers to flock to Chiang Mai:

The Songkran: takes place every April and symbolizes the Thai New Year. The tradition is to spray water on everyone to celebrate it. Bottles, bucket, cans, or water pistols, attendee will need to choose their favorite weapon! It lasts for an entire week, so if you visit the city at that time of the year, it would be an unforgettable trip with lots of fun and memories!

The Loi Krathong: also known as the “lantern festival”, where thousands of lanterns are released in the sky and on the rivers. Visitors will get lost in a fairy tale-like scenes with hundreds of yellow lanterns sparkling in the night. The festival takes place in November. 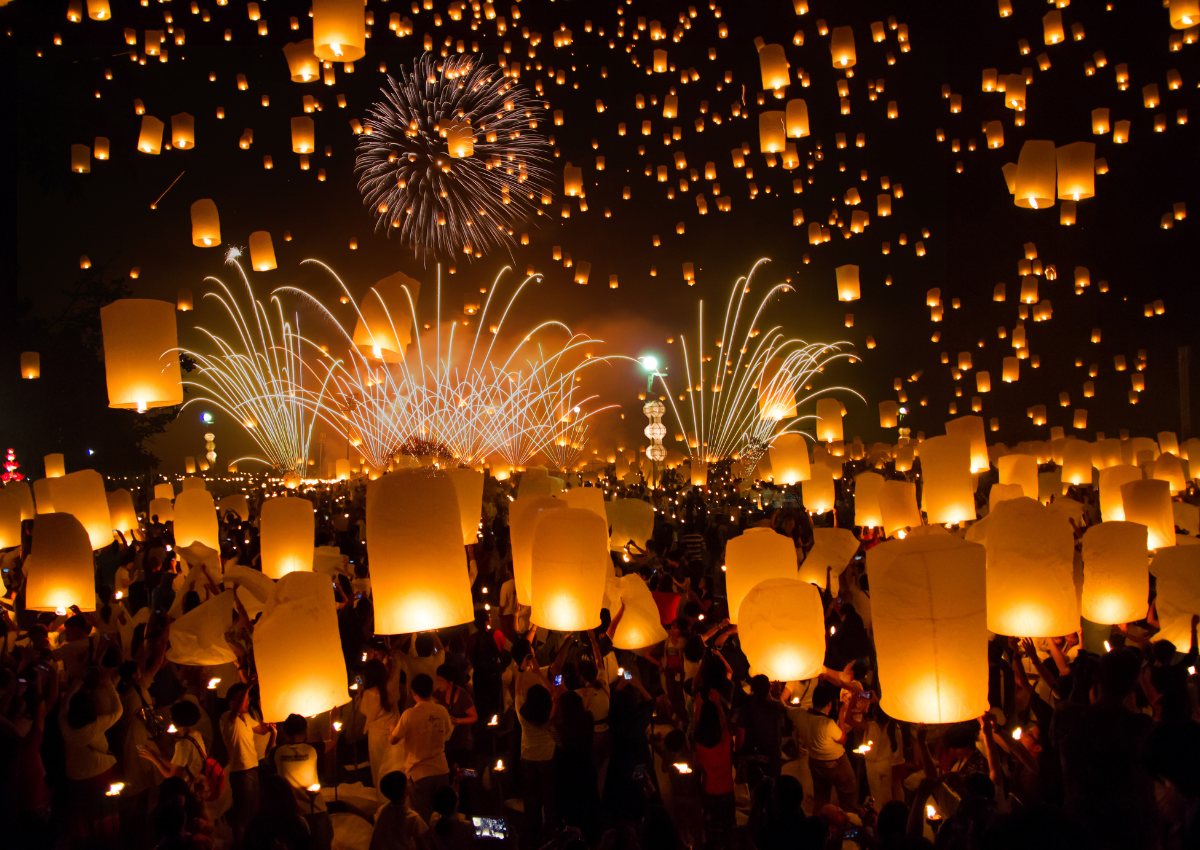 The Chiang Mai Flower Festival: hold every year during the first weekend of February. Traditional dance performances, vibrant float parades and open-air concerts are organized for this event.