Australia best pie, do you know where to get it ?

If you’re going to go on a bit of a road trip, you need to make sure there is a delicious treat at your destination.

So it’s timely that the Baking Association of Australia has just announced the country’s best pies for 2020. Now we can map out a pie trail, and give our weekend drives a real purpose. 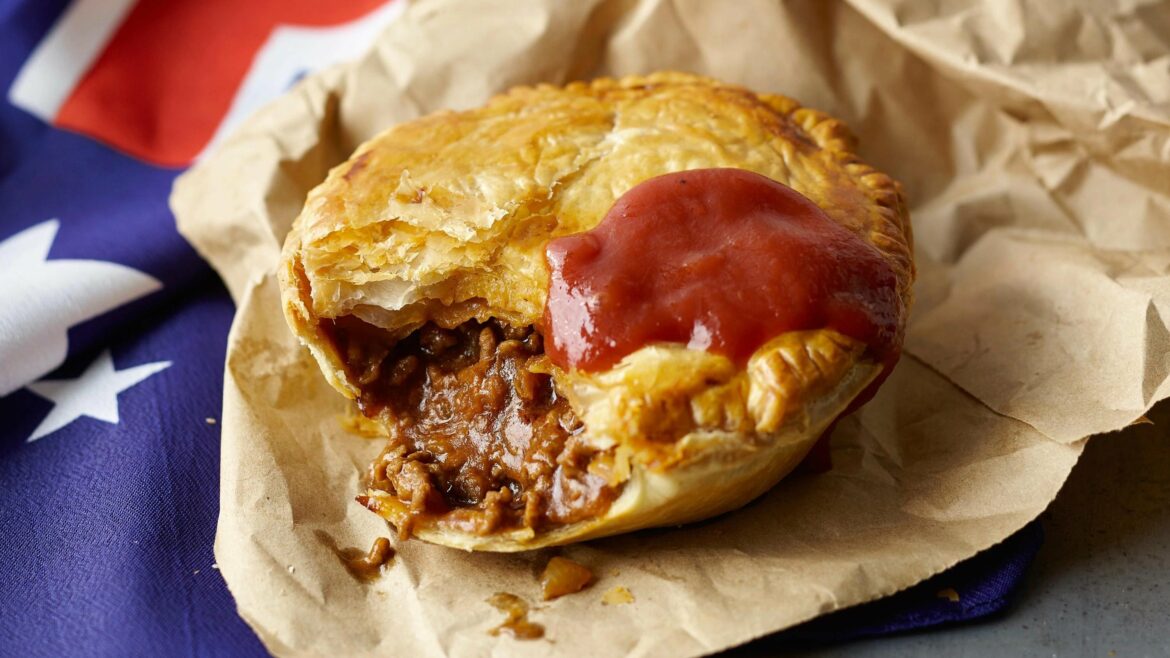 An Aussie icon, this classic pie is made with a shortcrust base and a rich beef mince gravy.

There’s good news for people living in Victoria (and let’s face it – Victorians could really do with a win). Country Cob Bakery in Boronia and Kyneton cleaned up, taking out a stunning four prizes: the best plain mince pie, the best flavoured pie for its pepper steak pie, best gourmet pie for its American barbecue whiskey pork and quail egg pie, and best vegetarian pie with its curry cauliflower, chickpea, lentil and pea number.

It’s clear the humble meat pie has really come a long way. Around the country you’ll find creamy scallop pies, innovative eggs Benedict pies and even ones that use our coat of arms as the filling.

So if you want to make a beeline for some of the country’s best, we’ve mapped out some highlights below (including the other winners in this year’s best pie awards, marked with an asterisk). 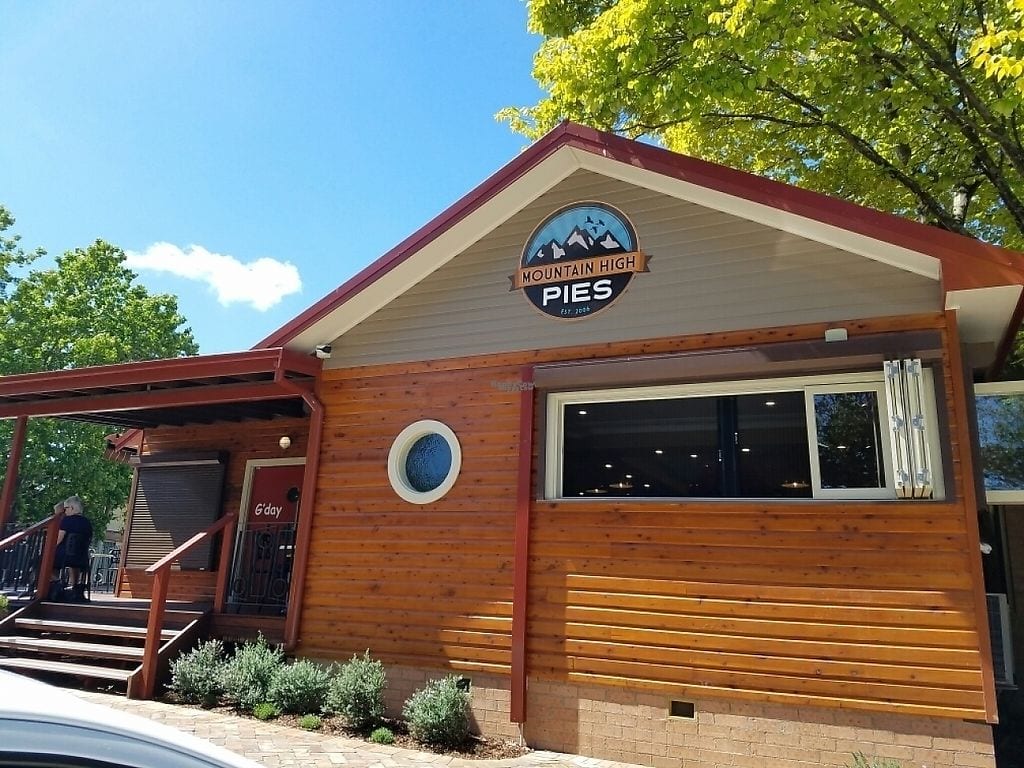 * Mountain High Pies in Wentworth Falls took out this year’s prize for best gluten-free pie for its lamb shiraz pie.

* Bels Gordon Street Bakery in Port Macquarie took out the best poultry pie award for its chicken cajun pie and best vegetarian pastie for its spinach and three cheese concoction.

The Southern Highlands is home to award-winning pie makers and with over 30 pie outlets in the region it’s come to be known as Australia’s “home of pies”.

At the Gumnut Patisserie (Mittagong, Bowral and Berrima), the menu winner is the Eden pie. Made with beef braised overnight in a specialty beer from the local Eden brewery, and mixed with smokey barbecue sauce and scooped into a savoury short pastry, it’s won countless awards.

The famous Robertson Pie Shop is a family-run business that has been going strong since 1961. Grab a chicken, camembert and leek or shepherd’s pie, followed by an apple turnover for dessert and have no regrets about your culinary adventures.

Other NSW road trip staples are at Heatherbrae’s Pies and Glenorie Bakery Café (which is just 45 minutes from Sydney’s CBD). 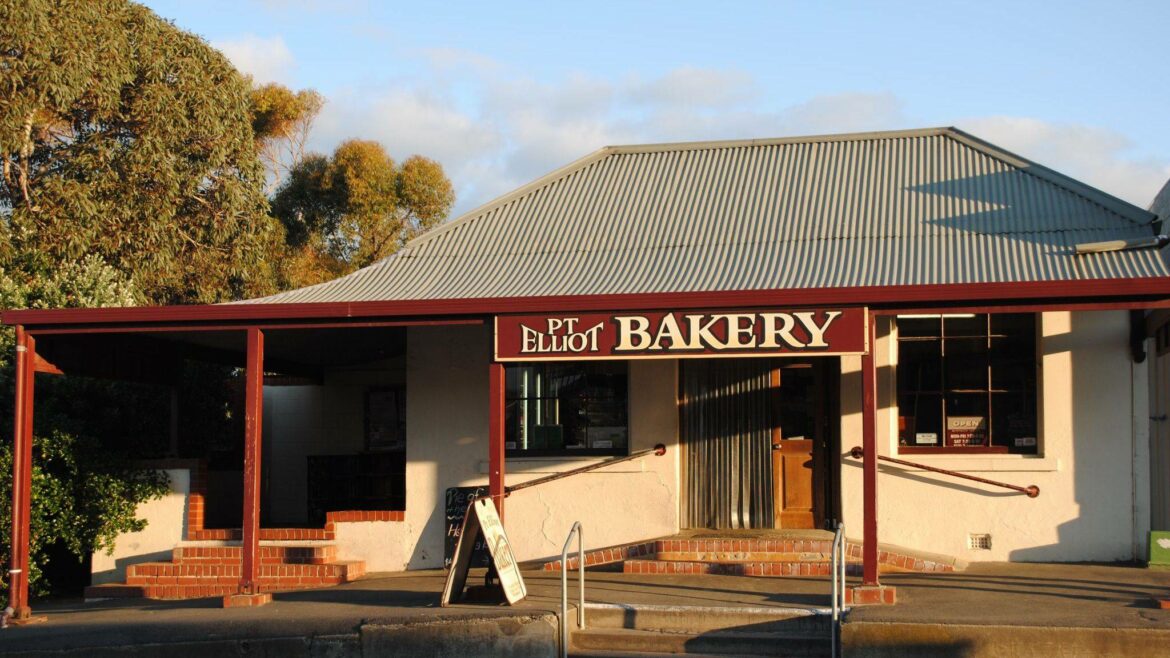 Port Elliot Bakery is located on the coastline between the towns of Victor Harbor and Middleton, about an hour from Adelaide. The seaside shop has been a staple since the 1860s, and is known among locals as the best pies in South Australia. In summer there is usually a 25-minute queue to get in. They have ‘pies of the month’ which have recently featured Hawaiian steak and red wine mushroom pies.

Apex Bakery is an artisan bakery based in Tanunda in the Barossa Valley. While visiting the area, you can explore the numerous parks, playgrounds and picnic spots with one of its venison ragù pies in hand.

With three Elaines Gourmet Pie Cafes across Canberra, located in Fyshwick, Dickson, and Phillip, it’s easy for visitors to Australia’s capital to find one during a visit. What sets these pies apart is the use of tender, slow-cooked meat. The cafes also offer unique iterations including a tuna mornay and a macaroni, bacon and shallot pie. 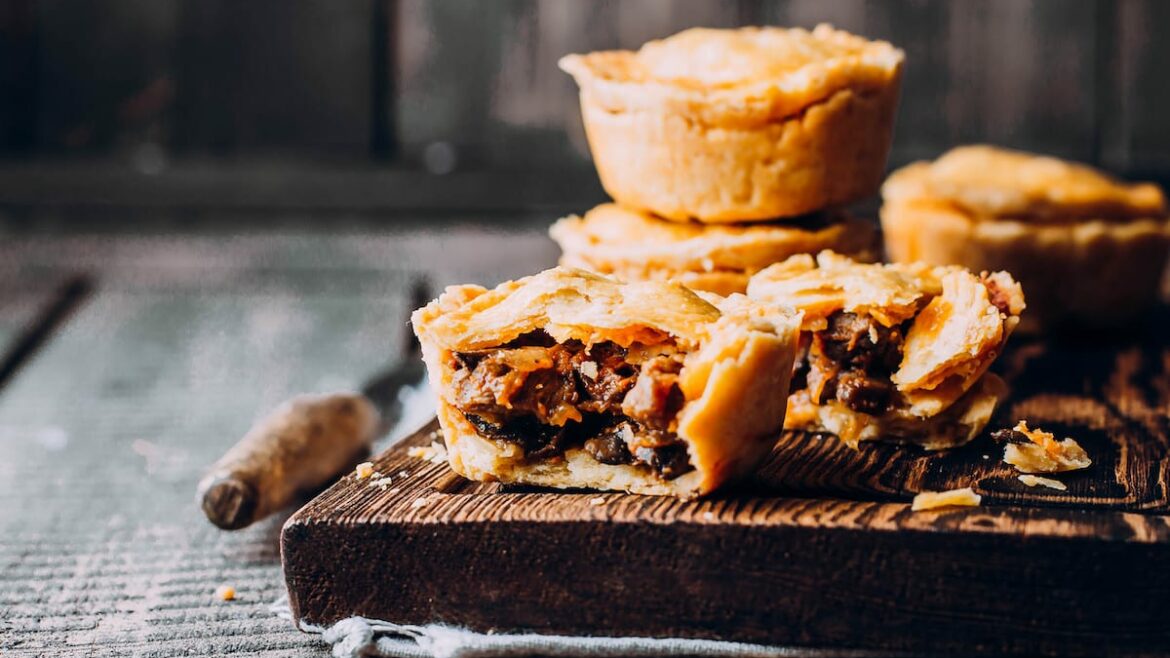 What sets these pies apart is the use of tender, slow-cooked meat.

Nick and Louise Smith started Crust Bakery and Café at the Fyshwick Fresh Food Markets in 2010, with over 50 years of experience between them. There are 12 different pies to choose from each day with pastry cooked to perfection, including chickpea and curry, spinach and feta, and lamb, rosemary and shiraz. 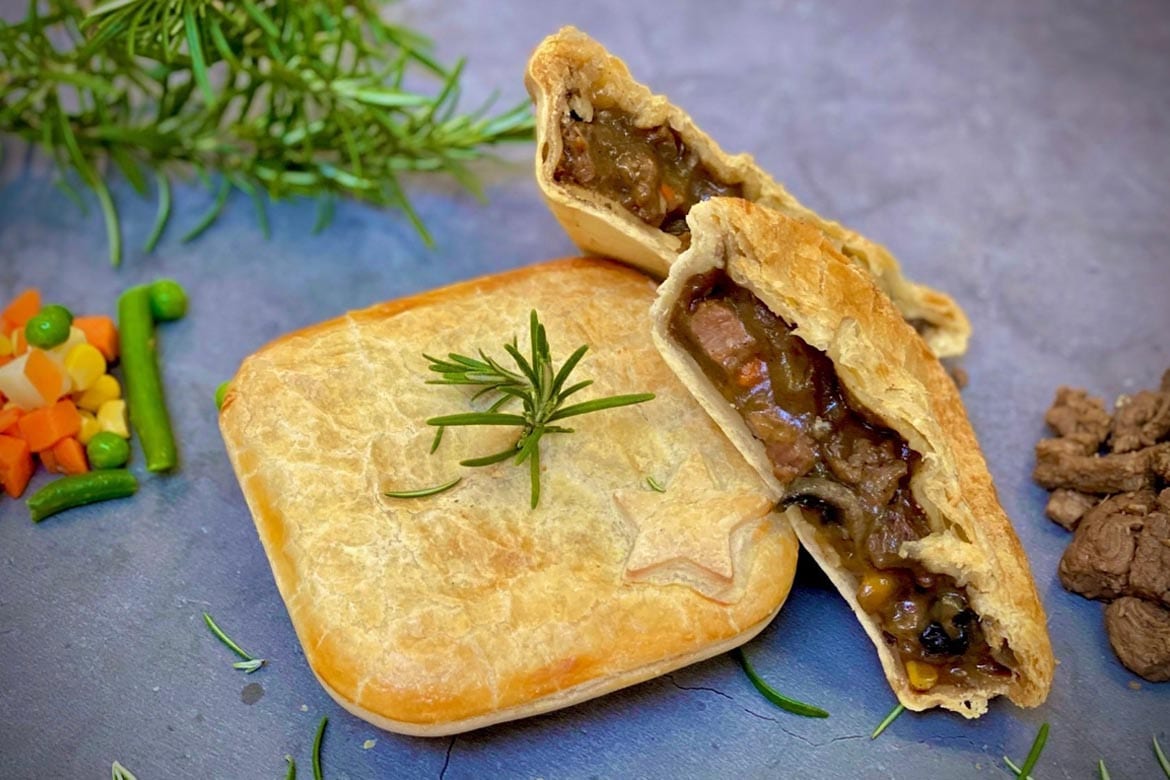 As well as Country Cob which we mentioned above, you’ll also find outstanding pies in Colac – home of a 1950s time capsule called Hulm’s Bakery. The square pies are full of flavour, and despite the flaky pastry, hold their shape right until the end.

At Gladysdale Bakehouse and Tea Rooms baker Jason Rush uses grass-fed beef from farms up the road, and red wines from the surrounding Yarra Valley, to create the ultimate beef burgundy pie.

Tasmania is famous for its scallop pies, so if you are looking for the best head to Blue Edge Bakery, a family-owned bakery in Bicheno. It won Tasmania’s ‘best scallop pie’ award in 2019. 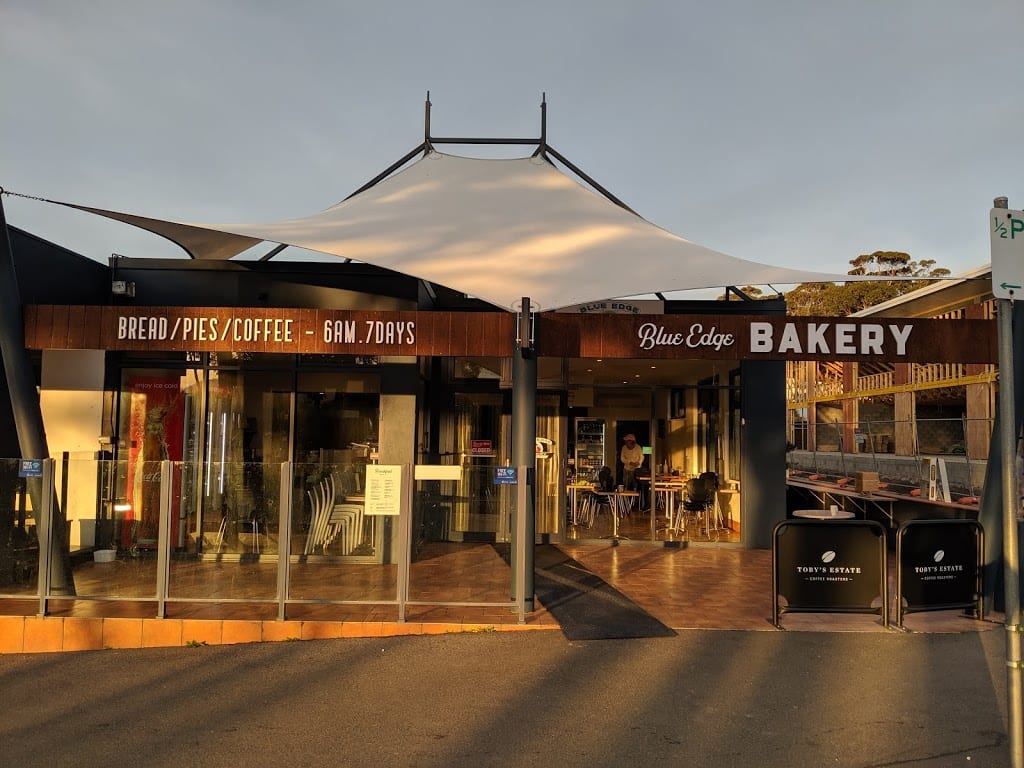 On the road between Launceston and Hobart, Ross is one of Tasmanian’s early garrison towns. The Ross Village Bakery is Ross’ original bakery and has been operating on the site for over 100 years. For a modern twist and in interest of keen anime fans, the bakery resembles the iconic bakery from the anime ‘Kiki’s Delivery Service’. 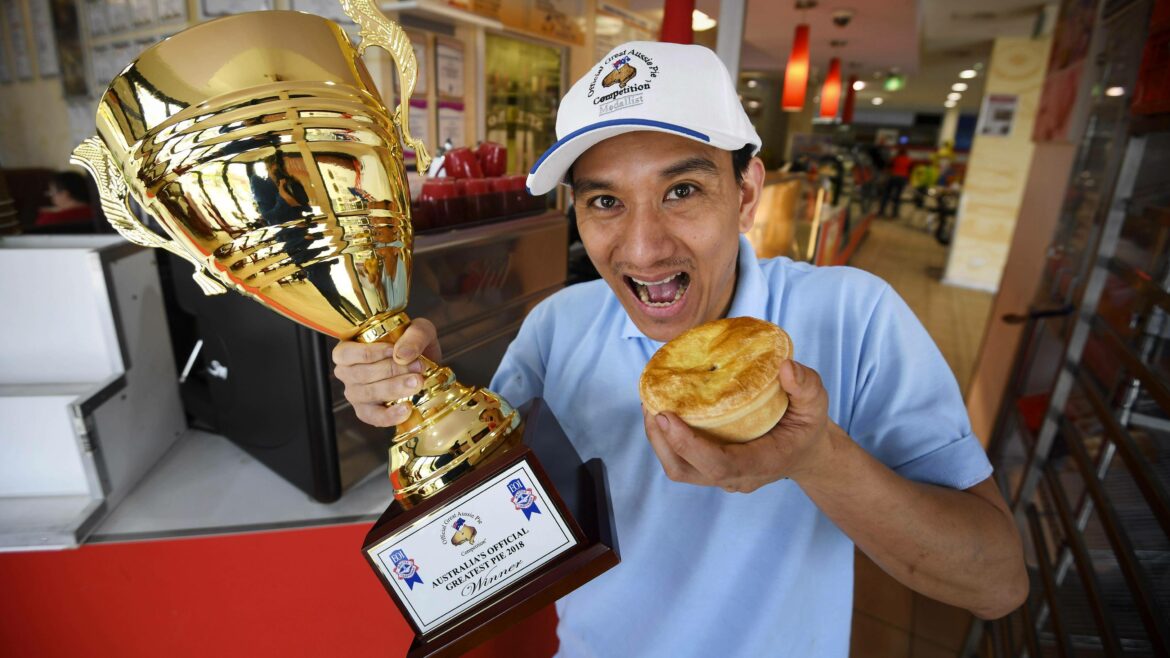 * The Four Seasons Patisserie in Kelmscott won “best seafood pie” in this year’s awards, for their Malaysian Seafood Pie.

A favourite of Prince Harry’s is Bindoon Bakehaus, and although he went to try one of their famous banoffee eclairs, their pies are worth a royal visit too. From the classic pepper steak to their famous Moo and Blue (steak with a blue cheese centre) there is something for everyone.

In the town of Wyndham, surrounded by some of the Kimberley’s most spectacular landforms, brave visitors can try crocodile and barramundi pies at Croc Cafe Bakery.

Family-owned Pinjarra Bakery won best mince pie at last year’s national Great Aussie Pie Comp, where it walked away with 14 gold, three silver and one bronze for its range of crowd-pleasing pies. 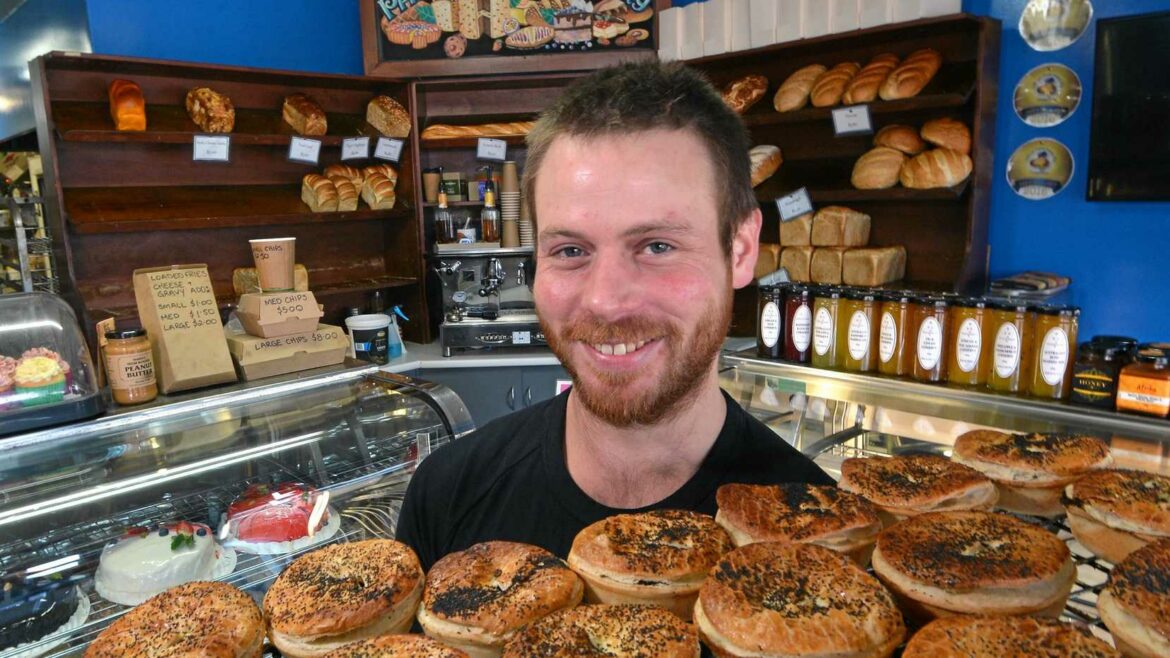 Yatala Pies has been a Queensland landmark for more than 130 years – you can’t drive past Yatala (30 minutes south of Brisbane) can be done without stopping in. Selling a whopping 3500 pies a day, it does a range of fantastic savoury and sweet pies.

Jochheims Pies has even caught the attention of Aussie celebrity Hugh Jackman while he was filming the movie Australia in Bowen. Jochheims is something of an institution, known for its quality ingredients and perfect crusts. People can order a Jackman Hunky Beef Pie or try the creamy prawn pie, made with locally caught seafood.

The legendary Old Fernvale Bakery has been established for more than three decades and its baking team has won hundreds of national pie and baking awards. It has over 100 different flavours of pies including emu, crocodile, camel and kangaroo.

A visit to Stanthorpe isn’t complete without grabbing a slice of Sutton’s mouth-watering apple pie. Each pie is handmade with no processed products and uses apples grown on the property.

You can’t travel to the heart of Australia without visiting The Bakery in Alice Springs. Everything is baked from scratch and the pastry is made from real butter. They like to keep things fresh, and a little different from the normal bakery fare, so depending on the day travellers might even see a camel or kangaroo pie on the menu.

The team at Tommo’s Pies, Darwin, know that a true blue Aussie understands the majesties of the humble pie. Tommo’s began making pies back in the ’70s and is still going strong today. The eatery keeps it simple with the classics, a few gourmet varieties such as Thai chicken curry and a vegan Mexican chilli bean pie. Situated just off the Stuart Highway, it’s the perfect spot to either start or end your Top End adventures.